[Originally published as a guest blog for the Trove forum on International Women's Day 8 March 2012. Photos by Craig Mackenzie courtesy of the National Library of Australia]

"The Dawn" was published monthly in Sydney, Australia from May 1888 until it's final issue in July 1905.

Touted as a journal for the Australian household, it was filled with recipes, dress patterns, beauty advice and household hints, much like you might expect in any women's magazine. It also contained articles on more serious matters of women's right to vote, their struggle for equal pay and divorce law reform. But in an age where women around the world were struggling to gain the right to vote, and ask for equal pay for equal work, what set "The Dawn" a part was the fact it was produced, printed and published by an all woman team, under the leadership of the formidable Louisa Lawson. 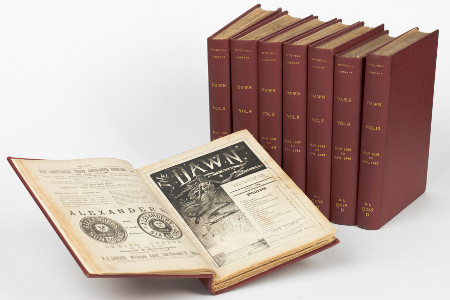 1888 was the centenary year of the first fleet's arrival in Port Jackson. Australia was heading towards federation, with a constitutional convention taking place in 1890. In 1894, women in South Australia were granted the right to vote. And in 1901, an Australian parliament sat for the first time in Melbourne as Federation united the colonies, and women were granted the right not just to vote, but to also stand for election. The Australian Flag was flown for the first time from the Royal Exhibition Buildings on 3rd September that year. Nation building was in progress.

Australian Town and Country Journal announced the coming of The Dawn as follows:

"'THE DAWN.' This is the name of a new monthly periodical published in Sydney, and purporting to be written by women for women. In other words it is, according to the prefatory notice, "The Australian woman's journal and mouthpiece." Dora Falconer is the editor, and Louisa Lawson the publisher. The paper is well and clearly printed, and contains a good deal of miscellaneous information and original articles which ought to recommend it to the favourable notice of its fair readers."

Louisa Lawson, writing under the pen name of Dora Falconer in the very first issue:

"Here we will give publicity to women's wrongs, will fight their battles, assist to repair what evils we can, and give advice to the best of our ability. ... We shall welcome contributions and correspondence from women, for nothing concerning woman's life and interest lies outside our scope."

The Dawn, and the printing business producing it was a commercial success. The publication itself was supported by advertising as well as the cover price of 3d per issue, or 3 shillings for an annual subscription. The advertising is now a fascinating snapshot of the commercial activities of the time.

Today, the full text of The Dawn, every page, of every issue is now accessible online in The Trove. Largely thanks to the generous donations of those people and organisations who supported the campaign to Digitise The Dawn.

Whilst doing research to uncover examples of women engaged in the pre-digital information technologies of printing, typography and telegraphy, I uncovered some details on Lousia Lawson's printing press, and The Dawn. I naively assumed the publication should be online. When I discovered it was not, and the modest sum of money it would take to see it done, I set out to raise those funds.

It started with a blog post, and a chip-in page. Then the campaign stepped up a notch with the creation of a twitter account, a hashtag #digitisethedawn, and a website at http://digitisethedawn.org. Then we started taking donations directly via PayPal. This somehow got the activity flagged for extra scrutiny under the Anti-Money Laundering and Counter-Terrorism Financing Act. PayPal blocked our account when I couldn't prove I was a charitable organisation. Fortunately however, the National Foundation of Australian Women came to the rescue. By agreeing to accept donations on our behalf, we were able to continue the fund-raising campaign. In the end, the National Library itself had to vouch for us, assuring PayPal this fundraising initiative was legitimate, so they would eventually release the funds.

Large donations from the Chifley Research Centre and Google Australia / New Zealand joined many smaller donations from organisations and individuals who all, thankfully, agreed with me that it was indeed high time to #digitisethedawn.

Once the funds were transferred, the National Library started the long process of scanning the original volumes, running the scans through character recognition software and engaging in a careful quality assurance process.

Today, I am in equal parts overwhelmed and overjoyed that this long held wish to see The Dawn online, has just come true. 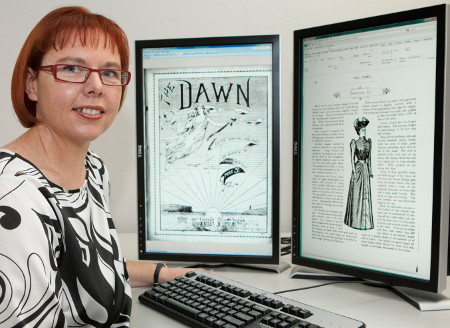